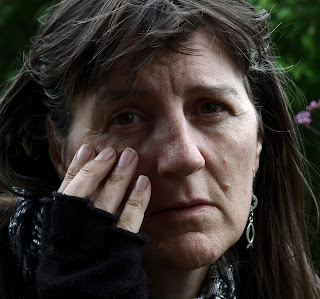 World wide premiere of Voices From The Shadows, The Mill Valley,  Film Festival, USA, Saturday 8th October2011
The reason we participated in the film is because we want the secret suffering  of people with Severe ME to be seen and respected properly, rather than the common media image of ME which is portrayed only as Chronic Fatigue, as being "tired all the time" with perhaps a sore throat, or depressed.
The representation of ME has a form of depression by the media has done so much damage,  in  ordinary people's understanding and image of people with ME.
Depression  is the last thing you have in Severe ME ; in order to cope, to survive, you have to maintain your internal integrity and sense of who you are in the face of an horrendous onslaught of disabling and debilitating neurological symptoms,which  tend to be omitted from the popular image of ME, but ultimately is what the disease is all about.
If you have not  got neurological symptoms , you do not have ME ;  that reality is neglected to such an extent that biomedical tests and treatments are completely ignored, even refused to ME patients and they are treated as malingerers and nutcases, people who just aren't trying hard enough, who somehow are at fault for just being ill.
If somebody says they have Cancer, they will receive compassion, concern and support from the medical profession, Social Services, society; if they manage to walk about, to engage in social activities, they are somehow seen as heroic , whereas the person who has Severe  ME, who struggles to engage with ordinary life, every moment of every day, but may be able to occasionally interact , is more likely to be misinterpreted as being not really ill and not needing the help and understanding which is critical for them to survive.
Let us hope this film brings about a radical shift in people's awareness of serious neurological nature of this neurological disease and the need for biomedical integrity.
Let us hope that the truth will be finally heard  that ME is not a psychiatric illness and should not be treated as such.
We believe it is not possible for anyone,   with any spark of humanity, to  watch Voices From the Shadows and  not emerge profoundly shocked , outraged  at what the psychiatric lobby  have done ; it is gut-wrenching.