Do not make a massive mistake 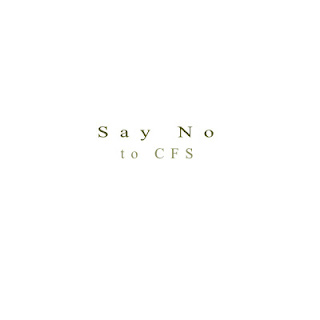 Make no mistake. If anyone argues that we maintain the "ME / CFS" label label :
They will not get the treatments they need.


Far  better to fight as hard as we  can , for the  new ICC guidelines  to be  universally adopted and patients  reassessed to separate out those with fatigue conditions and those with ME; then  all will get a better service.

ME has a viral trigger. CFS is a syndrome ; a  syndrome  is only a bunch of symptoms thrown together. CFS  is hopelessly undefined and vague; adding "CFS"  to ME is profoundly self-defeating.
CFS  is absolutely not the same as ME.
People with ME are harmed by fatigue interventions that deny the uniqueness of ME.


People with ME have neurological symptoms. People with CFS do not. To add them together under the sane label is extraordinarily dangerous for the ME patient.


CFS and ME need clarifying as different. People with ME need to be seen as a distinct group of patients with a specific illness not a vague condition .


Fatigue must not be the primary consideration . Post exertional fatigue and neurological symptoms must be the focus.


People with other fatigue conditions deserve a service, but they do not deserve the funding for research and services that belongs to ME. They must be separated so that ME patients will stop being neglected, offered wrong treatment or neglected , negated and left to fend for themselves,  as is the current case here  in the UK.


Thirty years of oppression and psychiatric domination constitute the status quo; do not make the mistake of arguing that it continues.