Huge ESA victory – now you have till Tuesday to save DLA 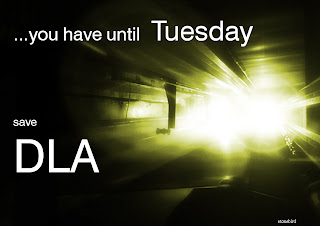 It’s not often we get to celebrate here at Benefits and Work.  So there has been enormous delight at the government suffering three – or possibly two - unexpected defeats in succession in the House of Lords over welfare reform

But if you want real joy, then please take part in the fight to save DLA.  It really is possible - but only if you act before Tuesday’s vote.  Please help to nail the latest government lie that you’re actually in favour of axing DLA.

Also in this newsletter, the shameful revelation that DWP decision makers can now have your appeal struck out before providing any evidence at all. They just need to tell the tribunal clerk that you said on the telephone that you no longer wished to continue and that’s it.

YOU CAN SAVE DLA BY TUESDAY
Last night, in victories that shocked even the most optimistic campaigners, the government was defeated in the Lords on three votes in succession.  (Open access)

The welfare reform bill was amended so that ESA in youth will not be axed, many cancer patients will continue to be exempt from the work capability assessment and contribution-based ESA for claimants in the work-related activity  group will be paid for two years instead of just one.

Of course this isn’t the end of the matter and the government will now try to overturn their defeats.  But they are looking in real trouble and compromises will have to be made.

Although, by what many people will regard as an underhand trick after most peers had gone home last night, Lord Freud succeeded in sabotaging the reinstatement of ESA in youth(external link), by limiting it to current claimants only.

Outrage amongst Labour and crossbench peers at the ‘unprecedented’ contempt for the will of the house scared him off using the same trick on the other two amendments, however.  His shabby trick also looks likely to have now made crossbench peers really, really cross with him.  Something he may regret next week.

The vote this coming Tuesday will be on axing DLA and replacing it with personal independence payment (PIP).

We’ve already told you about the excellent Spartacus Report  (open access) which was launched on Monday and which offers convincing evidence – the government have yet to deny it – that they misled parliament over the huge level of opposition from disability organisations to their plans for DLA.

The report  has caused an enormous stir on the internet (open access), generating literally millions of tweets and thousands of downloads from its first day and is now breaking through into other media, although some of its authors have paid a high toll in terms of their health.

It has gained high profile support from writers, politicians and celebrities and is unquestionably playing a part in changing the views of peers.  It even, astonishingly, receivedstrong endorsement from the Daily Mail online, (external site) not once but twice (external site).

However the government now seem to be claiming that although disability organisations aren’t in favour of PIP, the majority of individuals who responded to the consultation were (open access).

Benefits and Work readers have already responded magnificently to our request on Monday to help launch the Spartacus Report.  We’re now asking for your help to nip this latest government lie in the bud.

THREE THINGS YOU CAN DO TO CHANGE THE FUTURE RIGHT NOW
We’re asking Benefits and Work readers to do three things.

1 Sign Pat’s petition.
Pat’s petition asks for the same thing that the Spartacus Report wants – a pause and a proper consultation before further ‘welfare reform’ takes place.    A huge surge in signatures before next week’s debate is the simplest way to expose the monstrous lie that disabled people support these reforms.

We know some people fear it might be risky to give a name and address on a government website, as you have to in order to sign this epetition. But more than 14,000 people have already taken that ‘risk’. And if ever there was a day for taking a chance to save your benefits,  surely this is it.

You can add your name to the petition here and nail the government lie (external site).

2 Email a crossbench peer
The crossbench peers are the ones who have inflicted such damage on the welfare reform bill.  You may want to tell them that if they voted to protect ESA claimants you are very grateful.  But add that, whatever they voted before,  you would be grateful if they would vote to delay the PIP legislation, because your views have not been properly listened to.

Ask them to read the Spartacus Report if they haven’t already.  They can download a copy from this link (external site) – though they’ve already been posted a hard copy.

If you responded to the original DLA consultation in December 2010 tell them that too.

And if you have read about PIP and can explain concrete ways in which you personally would be disadvantaged, please explain that too.

There’s a list of crossbench peers here with links to their email addresses (external site).

Given that a large number of Lib Dem peers chose to abstain rather than support the coalition, and five actually rebelled, you might want to email a few of them too.

3 Get others to join the fight
Use email, twitter, facebook, your telephone and maybe even speak to people face-to-face and encourage them to make their views known before Tuesday’s debate in the lords on getting rid of DLA.

It isn’t a waste of time.  As last night’s votes showed, no matter how hard the government  and the media try to silence and vilify disabled people, dedicated campaigning can make an astonishing  difference.

MORE DIRTY TRICKS
It’s not just peers who stand accused of dirty tricks in relation to benefits.  The DWP and tribunals service have been cooking up one between them, it seems.

Your ESA and DLA appeals can now be withdrawn simply by a decision maker telling a tribunal clerk, without providing any evidence whatsoever, that you told them on the telephone you no longer wish to carry on.  It will then be your responsibility to try to get your appeal reinstated within a tight time-limit.  The shock change to the principle that appeals can only be withdrawn by the claimant themselves, and only in writing, was introduced last month in a bid to reduce the growing backlog of appeals.

The new rules apply provided that the decision maker has not yet prepared the bundle of papers and sent them to the tribunals service.  You can read more about the changes  here. (Members only. How to subscribe)

Our guides to ESA and to DLA appeals have now been updated to forewarn members and suggest strategies to ensure you are less likely to be affected.

If you’re making a claim for DLA or ESA or appealing a decision, don’t leave it to luck –subscribe to Benefits and Work and make sure you’re prepared for every trap set along the way.