Scandal !! How people with Severe ME are simply ignored. 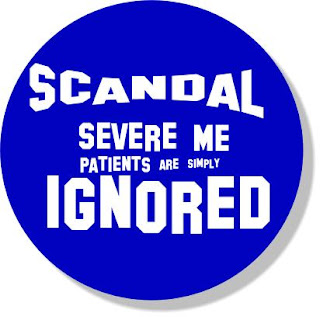 I have not posted anything in Stonebird for ages - that is because I am too busy trying, somehow to cope, to survive, Linda is so ill. It is fair to say, I think, that right now  Linda and I are being pushed way beyond the limits of human endurance.

Can you imagine that ?

If you do not have direct experience of Severe ME, no you probably can't

I have just received this heartbreaking,  desperate letter from a fellow sufferer - who has kindly allowed me to publish it, names removed,  to highlight the plight of  people with Severe ME, the scandal that the most ill are given NOTHING !!!

Far too ill to accept help, far too ill  to access the likes of Facebook, as this mother says - what do you do ? How do you survive the daily torture and  torment that is this awful illness ?

Going through hell here, sadly,  I have stumbled upon the following equation - the amount of help, the amount of understanding, the amount of friendship you get in is inverse proportion to how ill and how desperate your situation is .

Thank you for your site and being there as a source of support and a voice for people like yourself and others who are suffering from this terrible illness.

I am in a state of torment and like probably thousands of others have absolutely nowhere to turn, and just really need to relieve myself of the severe worry and stress I endure every minute if every day.

I am a 50 year old woman and a single parent to my wonderful caring Son .I have been housebound for the around 12 years with severe ME and tortured every day with severe symptoms, isolated alone and basically left by the medical profession, after the usual routes which is probably just as well.During that time I have been cared for by by son and my ageing Mother, we have no other family and my son's  father has never been there for him, or cared about him.

During all these years my son has never had any support, never complained and managed to gain a degree in Economics despite not being very well himself during that time.

Just after completing his degree he started to become very Ill, and now suffers from severe ME also.

We are now both housebound very Ill and living with my 95 Year old Mother, we have absolutely no support whatsoever, I am bedridden although I can manage personal needs and can get to the bathroom, my son  has enough in him to still look after me as far as giving me my meals but he has to lie down constantly throughout the day.

I am far too ill to have social services in as when I enquired they said they would only consider coming in if it was 3 times a day to wash and feed me and I definitely don't want that and neither does my son and my mum, it would be too much for us.

I have rung (a charity) , and they said they would ring us every week just to see if we were okay and if we needed anything, and then the bloke who came to see us said I know what your going through I have been diagnosed with chronic fatigue and get very tired! What the hell can you say to that! I just told him that we were seriously ill and didn't feel tired.My son felt some sense of relief though when he said they would ring and call if we needed anything, unfortunately they haven't kept there word and have stopped calling.

My greatest fear is that my son is going to be left completely without anyone and housebound without any family and very ill for the rest of his life.

I just need someone to call now and again to see if my son is  OK, he is going through hell, worrying about me and having not one person to support him, we are both far to ill to have social interaction online.

I know you are both suffering a lot, but it just gives me a release to tell someone who understands.