More than a Tragedy. 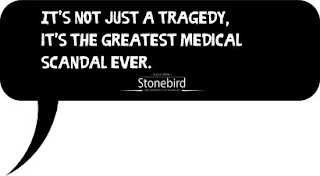 As Desmond Tutu states, if somebody injures you, “it’s as though they define you. If somebody slaps your face, they then define you as the person whose face can be slapped.” (Davis & Van Gelder 2015) For decades people with ME have been defined by the cruelty of having the vacuous label called “CFS” pinned to their heads, making them objects of derision and disdain; objects of disgust that any doctor can freely dismiss with a sneer.
Living lives of unimaginable suffering and neglect, especially the most severely affected, for decades on end, people with ME have had to endure the hideous pain of seeing the perpetrators of the violence against them, those responsible for spreading the lie and deceit that ME is a “somatoform”, all-in-the-mind- disorder- of- thinking,being portrayed in the media, as the heroic victims of a “campaign” against them by an ungrateful ME Community.
You can, however, only ignore the medical evidence for so many decades before the multi-million dollar edifice you have so skilfully constructed, without a single foundation in scientific fact, collapses- as it has this week in the New Scientist.
It surely demands a process of reparation.

Fania Davis and Sarah van Gelder (2015)  Can America Heal After Ferguson? We Asked Desmond Tutu and His Daughter, http://www.yesmagazine.org/issues/make-it-right/can-america-heal-after-ferguson-we-asked-desmond-tutu-and-his-daughter