ME : The Boss Battle 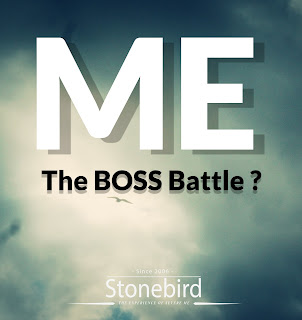 I am not a player, but I believe the last stage of a computer game is often referred to as the "Boss" battle; we are talking  the  ultimate encounter.

According to the MEAction Network,for example, a new network,  writing in the latest edition of The ME Global Chronicle : "We're in a moment of highest attention and media coverage of ME/CFS since XMRV".(Brea 2015)

It means, we are all over the place !

It means : "you win, because we haven't a clue who or what we are fighting for !"

How will the likes of us make any progress all the time our  agenda is just as confused and split ?

The same magazine, for example, also contains an article on what progress people are making through pacing : up to 80% recovery in "functioning", it is claimed. (Calaby 2015)

That is a whole world away, that is a very different universe from the seriously physically ill one my wife and I occupy, here in the outer, lost  reaches of Very Severe ME, where pacing is impossible.

If you "recover" significantly through pacing alone, without proper investigation, tests and  medical treatment then how can we be be talking about the same disease ?

We all know that our  field is a mess; so many other fatigue illness have been grafted onto ME in the form of "CFS" that the use of the nonsense term "ME/CFS" is epidemic.

It is no way to win this life and death battle.


Brea J (2015) Because It’s Time We Became The Strength Of Our True Numbers. ME Global Chronicle August 2015 http://let-me.be/request.php?21