Three reasons why Labour's hands are red with the blood of the disabled and the sick. 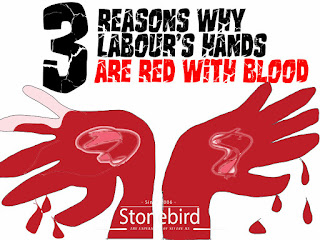 Will Jeremy Corbyn apologise for the pogrom it unleashed while in power,  culminating in yesterday's announcement that nearly 90 people a month are dying after being declared fit for work ?

Corbyn has called for Iain Duncan Smith's resignation.Yet the Orwellian chain of events that led to yesterday's tragic announcement was devised and set in place by Labour.

Here are three reasons why Labour's hands are stained red:

1. It was Labour that introduced the Work Capability Assessment

Before the Coalition and the current Conservative government came to power seriously ill and disabled people , found fit for work under Labour were denied Employment Support Allowance (ESA) and then subsequently written off, just left to cope with greatly reduced benefits on Job Seekers Allowance and little support. (Source : Not Working . CAB Evidence on the WCA.)

That is because they had all been subjected to the notorious Work Capability Assessment (WCA) which took little account of variable symptoms, generalized pain, exhaustion or the underlying seriousness of a person’s condition.

2. It was Labour that introduced the biopsychosocial approach

Labour’s extraordinary counterintuitive reasoning , towards disability, had its roots, says Jonathan Rutherford in the American right’s philosophy that the poor are the cause of their own poverty because they fail to take advantage of the opportunities “available” to them..

It all began in 1994 when the Conservative Government brought in UNUM, the giant American Medical insurance Company, to advise them on welfare reform, a member of that group was Mansel Aylward, who in 1999, as Chief Medical Officer at the DWP, devised the new Personal Capability Assessment (PCA), contracted out to the American Corporation Atos Origin, who used a computer system, Logical Integrated Medical Assessment (LIMA), which neatly side steped any inconvenient medical opinion (syzygysue 2014), where the ” emphasis was no longer on entitlement, but on what a person is capable of doing.”

The intellectual basis behind the PCA was UNUM’s “The Scientific and Conceptual Basis of Incapacity Benefits “ (SCBIB) by Gordon Waddell and Mansel Aylward followed by the 2006 report: Is work good for your health and well-being by Gordon Waddell and Kim Burton which are based upon the biopsychosocial model of illness, designed to “liberate” the disabled from the ” medical model” . According to the biopsychosocial model, under which untold tens of thousands of people, especially people with ME whose physical illness is almost completely denied and psychiatric treatment is the only treatment on offer , have suffered horrible abuse and even death.

The biopsychosocial model that Labour introduced was based upon the premise that ” Disease is the only objective, medically diagnosable pathology. Sickness is a temporary phenomenon. Illness is a behavior social phenomenon rather than a health problem. The solution is not to cure the sick, but a “fundamental transformation in the way society deals with sickness and disabilities. ”

The transformation is this : ” Sickness is a social and cultural phenomenon rather than a health problem. The solution is not to cure the sick, but to transform the culture of welfare. No one who is ill should have a straightforward right to receive benefit.”, this extreme agenda ” was adopted by the former banker that Labour brought in, David Freud , now Lord Freud .

Pushing the neoliberal agenda that Labour  pioneered to triumphant heights, ever since, the Coalition and the Conservatives have progressed some of the toughest, and most regressive social policies since the foundation of the welfare state. Building upon the “dependency-busting” foundation laid down by New Labour, never before has there been such a concerted onslaught on disabled/sick people, in terms of New Labour's distinction, entirely devoid of evidence, between the “deserving and undeserving poor”.(Roulstone )

Both the neoliberal politician and the private health insurance want to shrink the State, reduce public expenditure via privatisation and remove people from benefit entitlement . (Syzygysue 2011)

3. It was Labour that labeled the sick and disabled as “malingerers ”

It was a New Labour conference in November 2001 entitled Malingering and Illness Deception , together with their 2006 Green Paper: A New Deal for Welfare: empowering people to work – an independent assessment of the arguments for the proposed Incapacity Benefit reform that is responsible for the mind set that continues to this day : ‘malingering’ as being the motivation for claimants of disability benefits. (Stewart 2015)

In effect the DWP's agenda, ever since, has been motivated towards denying ‘illness’ and associated legitimate need, wherever possible. (Syzygysue 2011) This is despite the fact that all evidence supports the fact that, out of the entire DLA budget, less than 0.5% were bogus applications with 1.5% admin error. (Stewart M 2012)

As Laurie Pennie (2012) writes the consequent attack upon the disabled and sick has come from all fronts from “the financial to the moral – rewriting the social script in this country so that the needy are no longer full human beings with just as much right to a life as anyone else, but parasites, scroungers, burdens on the state, barely even human. “http://www.newstatesman.com/politics/2012/11/sick-and-tired-coalitions-war-disabled-and-destitute

Last Year a Conservative Welfare Minister suggested that disabled people should work for £2.00 an hour. (Morris 2014)

The consequences of the Coalition's policies have been terrible, with the disabled bearing the brunt of cuts. Benefits for disabled people and the poorest , this year, will have been cut by £18 billion, a cut of about 20%. (Duffy 2013)

In 2013 Amnesty International UK condemned this “regressive and lethal assault on our rights” (Left Foot Forward 2013).

My wife, who has Very Severe ME, has been chronically sick and disabled for over two decades. Last time we spoke to a Labour Party member, back in 1995, he informed us that 90% of the sick and disabled are scroungers.

Penny L ( 2012) Laurie Penny on the coalition’s war on the disabled and destitute http://www.newstatesman.com/politics/2012/11/sick-and-tired-coalitions-war-disabled-and-destitute