We must unite and stand firm ! 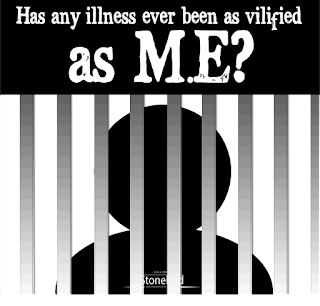 As a UK M.E sufferer you think we would have become immune to it. However as many of us woke to face another day of pain and struggle we could add the familiar sting of media persecution to the list. All the usual suspects are present and correct – derogatory terms such as “yuppie flu”, the obligatory model trying to look “tired” and in need of some good positive thinking. Usually the rage lasts 10 minutes, but the Telegraph has hit a new low with its recent article.

The last few weeks has seen Lyme disease become the cause célèbre of the press – every local rag scrabbling to find some local bastion of the community fighting this dreadful disease. No questions have been asked, no suggestion of malingering; after all a billionaire has exposed this scandal -  and they as we know are unimpeachable. It is amazing what a well funded PR campaign can achieve in a little over a fortnight. No wonder many in the M.E community wish to jump ship and attain a Lyme diagnosis. Last year my GP suggested I went to see a neurologist to rule out M.S. Having been forced to pay privately he looked at me with pity and said he wished he could tell me he could help but as it was definitely M.E then all he could do was refer me to the local fatigue service where he has never seen a positive outcome.

Has it come to this when I and many others are willing ourselves to have a different illness just to escape the relentless prejudice, misunderstanding and outright hatred we experience daily. Our illness is bad enough, for many it is a life sentence of suffering with no chance of parole.  What is the purpose behind this constant assault upon some of the most vulnerable members of society – we have no glamorous celebrity cheerleader, no money for PR -  many will struggle to keep warm this winter. The media propose a gothic parody of the Victorian asylum – what next ice baths, lobotomy and leeches? Has any illness ever been as vilified as M.E?  In my naivety I volunteered for the initial PACE trial – I informed them that I was an endurance athlete training for 24 hour races – exercise was my life and something had gone badly wrong. Mysteriously I was placed in the “control” group and that was my last contact. Science is based on the willingness, even the desire to be proved wrong -  yet there is something very rotten masquerading as science in the UK, blinded by a death grip on mistaken and outmoded belief.

When prejudice and closed minds manipulate the media history repeatedly teaches us the catastrophic lesson.  Social media has given us some hope and power – look at the outcry over the recent tax credit cuts. We must unite, stand firm and weather what hopefully will be the final storm before hope shines across the Atlantic!