How M.E. was never associated with Fatigue. 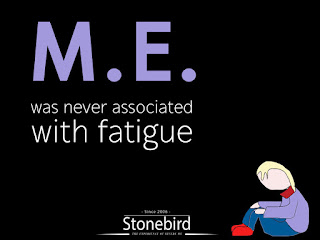 Stonebird is delighted to post this important summary by Jerrold Spinhirne

The early description ME by E.D. Acheson in 1959, based on careful observation of 14 outbreaks of the disease, did not mention fatigue of any kind as a commonly observed or diagnostically useful symptom:

"All the outbreaks shared the following characteristics: (1) headache; (2) myalgia; (3) paresis [muscle weakness, partial paralysis]; (4) symptoms or signs other than paresis suggestive of damage to the brain, spinal cord or peripheral nerves; (5) mental symptoms; (6) low or absent fever in most cases; (7) no mortality. In addition, (1) a higher attack frequency in women; (2) a predominantly normal cerebrospinal fluid, and (3) relapses have occurred in almost all outbreaks. In eleven of the fourteen epidemics symptoms which suggest activity of the disease have persisted for months or years in a few cases, and in eight instances there was an apparent predilection for the nursing or medical professions. Lymphadenopathy was a feature in four outbreaks."
http://www.name-us.org/.../DefinitionsArt.../Acheson1959.pdf

Neither does Melvin Ramsay's 1986 case definition of ME mention fatigue of any kind.

“A syndrome initiated by a virus infection, commonly in the form of a respiratory or gastrointestinal illness with significant headache, malaise and dizziness sometimes accompanied by lymphadenopathy or rash. Insidious or more dramatic onsets following neurological, cardiac or endocrine disability are also recognised. Characteristic features include:

(2) Neurological disturbance – an unpredictable state of central nervous system exhaustion following mental or physical exertion which may be delayed and require several days for recovery; an unique neuro-endocrine profile which differs from depression in that the hypothalamic/pituitary/adrenal response to stress is deficient; dysfunction of the autonomic and sensory nervous systems; cognitive problems.

In the last paper published by Ramsay, and with Elizabeth Dowsett, in 1990, this was the ME case definition they used:

"We adopted the following clinical criteria for investigation of ME: a syndrome commonly initiated by respiratory and/or gastro-intestinal infection but an insidious or more dramatic onset following neurological, cardiac or endocrine disability occurs. The pathognomonic features are: a complaint of general or local muscular fatigue following minimal exertion with prolonged recovery time; neurological disturbance, especially of cognitive, autonomic and sensory functions; variable involvement of cardiac and other systems; a prolonged relapsing course."
http://www.ncbi.nlm.nih.gov/pmc/articles/PMC2429637/

Perhaps post-exertional muscle depletion or dysfunction would have been a better term to use than "muscle fatigue" to avoid confusion with subjective, perceived fatigue. Muscle fatigue can be objectively measured. Perceived, general fatigue can only be evaluated by psychometric questionnaires – an important distinction.

"One of the most striking features of ME is that the patient is not tired all the time! Extreme and sudden variability of energy levels both within and between episodes of illness differentiate this syndrome from other diseases associated with fatigue. One can only deplore the current fashion in the United States as well as the United Kingdom to redefine and rename a disability which has been clearly described in the literature for at least 100 years."

"There is nothing to be said in favour of the American acronym CFIDS (chronic fatigue immune deficiency syndrome) with its connotation of a primary immune dysfunction. The term 'chronic fatigue syndrome' recently adopted in this country also is nonspecific and non-descriptive because most of the definition is based on a vast number of exclusions (some of which, for example, endocrine disturbance, are actually found in ME)."

"'Post-viral fatigue syndrome', another British name, describes one essential feature (the association of the illness with viral infection) but gives the impression that the infection was antecedent rather than, as we now know, persistent. I prefer to use the more specific term 'myalgic encephalomyelitis' as it emphasizes the essential encephalitic component of the illness, the muscle pain, and the close clinical and epidemiological similarity to poliomyelitis."
http://www.ncbi.nlm.nih.gov/pmc/articles/PMC2399326/?page=1