There is little hope... 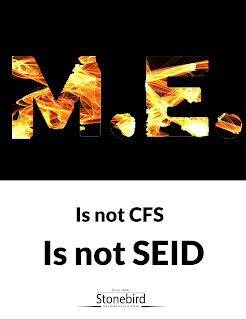 An article on CoCure calling for "CFS/ME/SEID to be properly incorporated into mainstream medicine. "


You know, we stand on the shoulders of giants,the Ramsays, the Dowsetts, the Hennesy's, but when the IOM, ignoring the volumes of research outlining the Neurological, Autonomic, Neuroendocrine and Immune system malfunctions that constitute M.E, ignoring Severe ME, claimed that M.E. and CFS “denote conditions with similar symptoms” and proposed "SEID", it was as if they had effectively done what the psychiatric lobby have been trying to do for years... bury ME under fatigue :
http://carersfight.blogspot.co.uk/…/a-tragic-mishmash-of-id…

All the time that ME, as defined by Ramsay and the WHO , is confused with Chronic Fatigue, or is ignored or wrongly misrepresented as Chronic Fatigue Syndrome, or SEID, there will continue to be little hope of proper medical investigation or representation, especially for the most severely affected, we fear.