What would Thomas Wakely say ? 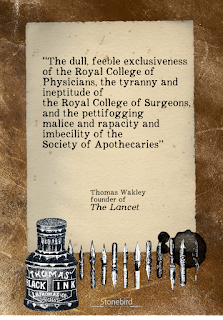 I wonder what the founder of the Lancet,Thomas Wakely's reaction would have been if eleven
thousand of the sickest and most neglected patients in the world and their representatives had written to him demanding the retraction of the PACE Trial paper ?

I would love to have met the extraordinary Wakely, this : "darling of the Trade Union movement, hero to the Tolpuddle martyrs, writer of radical tracts and maker of radical speeches", who by all accounts, spent his life challenging the vested interests, the medical corporations, who to him were a " an abscess on the body of the profession."

The "the old hags of Rhubarb Hall", he used to call
them !

The title of the "Lancet was not idly chosen".What would Wakley  make of the psychiatric lobby and their ongoing refusal to publish the raw data, especially given how so many world class academics are actively challenging the PACE Trial
results ?


You can't help thinking that maybe this man of high ideals, this stern moralist, this "utterly fearless and determined" campaigner would have been horrified at the suffering people with ME, especially the most severely affected, are forced to endure for decades on end, with nothing and no one to help.
This man, whose passion for truth " put him on a more or less permanent collision course with the status quo", I wager, would have had a great deal of sympathy and time for our cause !!