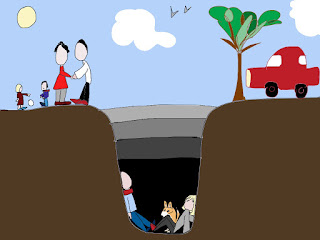 "The noise, sudden, assaulting, painful, like a dagger in her ears and a kick in her guts and a blow to her back and her legs, all at the same time, instantly demolished her.

Anger rose in her, unwanted, yet nevertheless real.

And who would not be annoyed to be suddenly unexpectedly, violently assaulted?

The shift from ability to inability virtually instant, the transition and sensations literally intolerable, who would not shout out, cry in distress, react in anger, at the violence done to them, again and again and again, without any warning or control?

The ability, the hope, the possibility of thought or action ripped away in an instant, intense, increased pain pouring in, for she was always in pain everywhere in her body, like a hot, burning constant rash, covering every millimetre of her skin, but when noise hit her, the pain intensified further and was too much to bear now, almost twenty five years on, experiencing daily, moment by moment agony without easement or relent, constant, total, torment...any slight increase now, was demolishing in itself, without all the other multi-level sensations that fired up and deconstructed her still further.

It was beyond agony. It was unbearable, yet still it had to be borne and each angry outburst required repair, in order to continue any semblance of relationship with her husband, her dog, her neighbours, the outside world and all its careless noisy violations.

She felt like an alien, a pariah, a misfit, no, beyond a misfit, for people did not see her, treated her as if she was non- existent, never asked after her, never considered her, she was invisible, living in a dark, pain filled vacuum, not seen or experienced by the ordinary world, neither friend nor neighbour nor enemy alike had any glimpse of her.


Yet she experienced them devastatingly and repeatedly, felt their ignorance, was demolished by their carelessness, was harmed by their ordinary everyday lives and hit like a ping pong ball around her own home, trying to avoid the devastation they wreaked upon her repeatedly whilst they carried on regardless and not even considering the consequences of their actions."