ME Consciousness in a post-PACE world 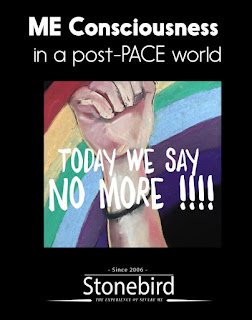 How can treatment advances be made when so many care givers still have this  'caveman' status where nothing is happening except fire gazing?
Dr John Whiting

Rather than being willingly listened to and investigated people with ME have been dumped in a medical desert and left to rot there for decades with :
Instead of the clinical clarity one would expect and deserve for a serious disease with severe multi-system dysfunction and long term physical disability, people with ME encounter a cauldron of disbelief, vagueness, confusion, misinterpretation, misrepresentation, mistreatment, physical neglect and denial.

My wife, for example, who has suffered from Very Severe ME for almost 25 years, still has no explanation for her symptoms, the most severe of which, like paralysis, are still barely mentioned in the biomedical “ME/CFS” literature, which predominantly focuses upon fatigue.

She has paid for and received advice that has varied greatly in quality from useful to downright dangerous. She has been greatly harmed by clinicians not listening to her, but following their own preconceived, set agendas. It is virtually impossible, unless you pay and even that door seems to be shutting, to receive advice in the first place; very, very few clinicians seem at all interested in ME, especially Severe ME..

The message from the medical establishment is that their illness is :

The initial test developed for ME`was the VP1 test (Williams 2011), an enterovirus test, not specific to an individual enterovirus, but at least a help identifying that there is a persistent enteroviral infection and as a consequence, who has actually got ME.

Why was it abandoned, leaving no biomedical test in its place, leaving the door wide open to psychiatric misdirection primarily towards fatigue and psychosocial management, as exemplified in the PACE Trial, which is all set to be repeated, this time among children ?(Colby 2016)

Natalie Boulton (2016) warns : “CFS and ME, (the names are used indiscriminately), is being established as a common condition. As a consequence, when it comes to treatment, management approaches are used that may be of some limited benefit to some fatigued children, but they are likely to be utterly disastrous for the minority with ME.”

It is devastating to be given the vague diagnosis of “ME/CFS”. An ME/CFS diagnosis helps no one, because it does not specify which disease a person actually has.

Until enteroviral testing and interpretation are brought back and focused upon for ME, those with Myalgic Encephalomyelitis will continue to be overlooked and endangered in a sea of other misdiagnosed, misunderstood and poorly treated illnesses.

How tragic that just like the PACE Trial investigators, the medical establishment has :

As a consequence the most severely ill in particular, languish in a nightmare of agony and physical distress. Many die, we personally know ten who have lost the dreadful battle for survival. We see little hope of change all the time clinicians conflate a whole range of vague fatigue illnesses to mean Myalgic Encephalomyelitis.

ME is not necessarily CFS, but neither is it ME/CFS or CFS/ME, because not every one equates ME and CFS using the same diagnostic criteria. With such endemic confusion you cannot just add names together and mean the same disease.

Neither can you use a wide variety of different criteria, to identify ME, while ignoring most of the more severe symptoms. Without a universal agreed criteria, people with very different diseases, requiring very different approaches to treatment will continue to be lumped together and confined to the current medical dead end that is “ME/CFS”.

ME and CFS are not interchangeable names, they hold wildly different meaning for different practitioners depending upon their particular field of interest or concern; there is no constancy and consistency of definition.

This is completely unacceptable. It leaves no one with a safe understanding of why they are so ill.

If someone has Diabetes, there will be a consistent recognition of the symptoms, disease and an understanding of what is required. It does not have :

Diabetes has a clinical pathway, it has monitoring, support and respect. What a different world that is!

The PACE Trial has all but collapsed (Tuller 2015), but how can anyone make a convincing case for a post-PACE world when it is not clear what exactly is meant by fundamental terms?

There needs to be a return to first principles. ME used to mean a neurological disease initiated by an enterovirus, according to Dowsett (2001). Now the term CFS incorporates poorly identified people with Lyme, Allergy, MCS, Unidentified Piituitary damage and Addinson's, Hypothyroidism, rare diseases such as Periodic paralysis etc and any number of other untested for diseases.

It is a travesty that the diagnosis of ME no longer focuses on enteroviral infection as the main specific trigger. In fact if you talk about enterovirus it almost feels as if you have said a dirty word.

A first step would be to at least bring back the VP1 test and use it as a starting point to separate enteroviral ME from the many other illnesses lumped in the messy CFS/ME, CFS and ME/CFS categories currently used.

Better provision, better identifying procedures, tests and a separation of other identifiable disease, especially Lyme, are required to provide better treatment protocols for all and a separation from ME altogether.

The medical establishment must start taking all patient symptoms seriously, seeking for rare and known diseases that have specific protocols in place, if only they are identified. There has to be a willingness to better identify the difference between patients and find any pathogen underlying their illness so that they can be labeled with the correct disease and treated accordingly.

The driving focus, right now, is fatigue, but that is only to look only at the tip of the iceberg.

What is required in a post-PACE world is a biomedical focus, using common specific criteria to safely identify a single illness, meaning Myalgic Encephalomyelitis, that focuses not upon on generalised fatigue, but all symptom experience and system dysfunction .

There has to be a commitment to working with the most severely ill that takes into account their physical disability and the way the disease impacts upon them, so that harm and deterioration does not ensue. People with Severe ME must no longer be excluded from research and treatment but neither must they be continue to be harmed by :

nor their experience be ignored in terms of looking at and understanding the illness they have.

Centres of Excellence, teams of clinicians working together holistically, not just looking at individual symptoms or organs, but at the whole picture and the whole impact, aiming to comprehend how the disease affects the whole body in individual ways are urgently required.

Clinicians must be trained to really listen and take note of what they are told and comprehend what the patient is describing, what they are actually experiencing, not just what the practitioner assumes is going on or wants to focus upon. This is essential so that harm does not follow. With ME the after affect must always be taken into account.

Clinicians who have deep and wide clinical knowledge of system malfunctions and a real interest in Myalgic Encephalomyelitis and access to serious testing facilities are required, plus an ME-aware domiciliary service for people with Severe ME who are far too ill to attend hospital or clinic appointments, one that is able to take into account the numerous hypersensitivities and a great need for flexibility.

Patients need to know what is wrong, they need help not harm.

The key to a post-PACE world is ME, not CFS consciousness.

Boulton N(2016) A Parent’s Perspective; ‘Lost Voices’ as the years past. A talk given by Natalie Boulton at the ‘Hope 4 ME and Fibro’ conference in Belfast on June 6th 2016. http://voicesfromtheshadowsfilm.co.uk/2016/presentation-for-belfast-6th-june-2016/

Dowsett EG(2001) THE LATE EFFECTS OF ME Can they be distinguished from the Post-polio syndrome? http://www.poliosurvivorsnetwork.org.uk/archive/lincolnshire/library/dowsett/lateeffectsme.html