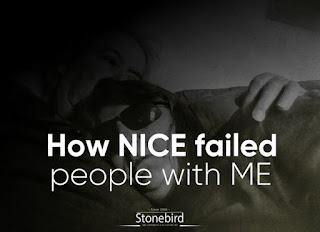 IT MOST CERTAINLY DOES !!!

When CG 53, based upon a handful of low quality Randomised Controlled Trials ,  that were methodologically flawed,  was published in 2007 almost all the UK ME Charities condemned it as unfit for purpose. This is hardly surprising given that the Guideline Development Group (GDG) excluded from its membership all NHS specialists experienced in treating adult ME patients .

As Kevin Short (2012) comments: “This is shocking by any standards: imagine the media outrage if a NICE guideline on infectious disease excluded all virologists from its production or a guideline on breast-cancer excluded all oncologists?”

The ME community greeted NICE’s guideline with disgust and widespread outrage that so much evidence about ME had been ignored.

Over twenty renowned ME experts later provided Statements to the Court (Judicial Review of the NICE Guidelines) challenging the validity of the research that NICE used for its Clinical Guidelines.

Here is a brief overview of the many ways NICE got it so wrong :

Margaret Williams (2008) comments : “the proscribing by NICE of appropriate testing and its stipulation that any vitamin or mineral deficiency must not be corrected by prescription would seem to constitute a real and even life-threatening danger to people with ME/CFS.”

NICE’s proscription, although only guidance, is quite extraordinary , in light of the evidence.

The ME community has for many years suffered from the psychiatric takeover and denial of their illness, leaving doctors and patients floundering in a sea of misrepresentation,misinterpretation, mistreatment and misdiagnosis.

CG 53, as this document has outlined,  is a prime example of how the physical tortuous reality of neurological ME is constantly denied, diminished, negated and ultimately neglected. The ME Community , we pray, will grasp this opportunity, especially building upon the recent exposure of the PACE Trial, to show how unfit for purpose the NICE Guideline is.

Short K(2012) A CALL FOR A PARLIAMENTARY SELECT COMMITTEE OF INQUIRY INTO UK ME & CFS POLICY http://www.angliameaction.org.uk/docs/wessely-misleading.pdf