The disease that used to be known as “ME” 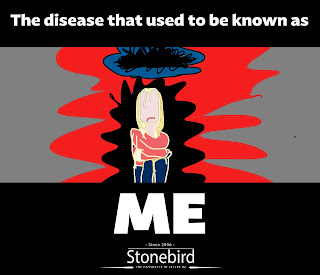 The disease that used to be known as “ME” is not recognisable under the umbrella terms of ME/CFS or CFS or CFS/ME.

"ME" has become a meaningless term; a complete and total disaster for everyone
We are sick of the misrepresentation, the misinterpretation, the lack of clinical respect, the focus on fatigue, the compromises, the misdirection, the mistreatment and misinformation that constantly negates the disease and holds out little hope of change, especially for the most severely affected.

Clinicians and charities have, we suggest, contributed to the demise of the term ME by focusing upon fatigue and not the more serious Neurological/Cognitive, Autonomic, Neuroendocrine, Immune, Cardiovascular and Gastric manifestations and Enterovirus as the cause of the disease .

They have failed to stand up adequately, if at all, against the damning involvement of psychiatry, often colluding with them openly, condoning for example a research collaborative here in the UK that openly includes and is led by psychiatrists, rather than pushing boundaries enough to get real change.

They have allowed the mishmash CFS continuum to continue by uncritical use of the term and by accepting poor and varied use of different criteria that result in poor, inadequate diagnosis and recognition.

In our long experience, they have displayed professional arrogance and mistreatment in spades through their ignorance of the most severe symptoms, especially paralysis.

They have shown little understanding of the extraordinary degree of awareness and skill required in interacting with someone so ill and so hypersensitive.

The consequence is that people may or may not have the neurological disease, “ME” identified by Ramsay et all. How can anyone know, if there is no test that identifies it and the only one that was created for it has been disregarded and no longer offered?

Even if you can find a knowledgeable and experienced doctor, without a diagnostic test, there is no real certainty that you have what they say.

At the end of the day, when you really look at it, it is all, shockingly, guesswork. We are all being left in the dark with no proper service. Any treatment options surely are trial and error posing a grave risk particularly to the most severely affected.

In truth we are all living in a nightmare.

What we need to do is demand the physiological explanations that underpin our symptoms and illness experience. Without this knowledge we are all endangered.

A test should be the first priority, we should at least fight for at least the VP1 test to be reinstated in the UK . Everything else means endangerment for some at least and continued misuse of the name Myalgic Encephalomyelitis.