An open letter to the Secretary of State for Health, regarding the JCPMH MUS Report. 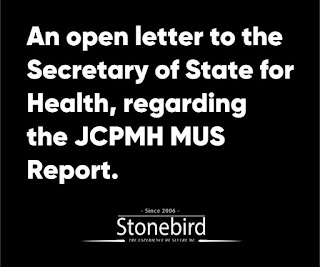 On Feb 9th 2017,the Royal College of Psychiatrists and the Royal College of General Practitioners
published  "Guidance for Commissioners of services for people with medically unexplained symptoms – practical mental health commissioning" (Joint Commissioning Panel for Mental Health), specifically listing Myalgic Encephalomyelitis as a "Functional Somatic Disorder", in other words a mental disorder.

On Feb 20th, I wrote to the Royal College of Psychiatrists stressing how  Myalgic Encephalomyelitis (ME) is not a mental disorder. It has been recognised by the World Health Organisation since 1969 as an organic neurological disease, classified under ICD code G93.3.

In November 1987 ME was recognised as an organic disease by the Department of Health (Hansard: 27th November 1987:353).  The CMO report of 2002 described ME  as a "genuine illness" which,"imposes a substantial burden on the health of the UK population." On Nov 20 2012 the Countess of Mar said that she been reassured that "Her Majesty's Government accept the WHO's categorisation of ME as a neurological condition".  On 14th Jan 2013 the Minister for Care, Norman Lamb wrote to me confirming that "ME is genuine and disabling, is associated with altered neural functioning and causes significant and in some cases profound disability".

On March 20th the Countess of Mar asked, in regard to the JCPMH document  : " upon what scientific basis the Expert Reference Group for the Joint Commissioning Panel for Mental Health (JCPMH), in publishing their guide on Commissioning for Medically Unexplained Symptoms (MUS), based their decision that myalgic encephalomyelitis/chronic fatigue syndrome (ME/CFS) should be categorised as a functional somatic disorder, given that the World Health Organisation’s mandatory International Classification of Diseases categorises the illness as neurological under ICD 10-G93.3, and that the National Institute for Health and Care Excellence (NICE) has not listed ME/CFS as a functional somatic disorder.."

ME is not "medically unexplained"; there are now over 9,000 peer-reviewed articles describing the complex biomedical pathology of the disease.

In 2015 the influential USA Institute of Medicine, stressed that ME is a medical, not a psychiatric or psychological illness.(IOM 2015)

The National Institute of Health (USA) concluded in 2015 that the Oxford Criteria are flawed and should not be used anymore.

In a letter to me, dated March 2nd, enclosed, the Co-Chairs of the Expert Reference Group for JCPMH Guide on Commissioning for MUS and the Co-Chairs of the JCPMH claimed that the : "The content of the MUS guide is fully in line with NICE guidelines and with current practice. Should the relevant NICE guidelines alter, or the evidence in this area change, then we will revise the guide accordingly."

I wrote to NICE, however,  on March 13, letter enclosed, and they confirmed on March 15 that their Guideline CG53 does not list ME as a  functional somatic disorder.

It is  inappropriate that the JCPMH Report has been endorsed by so many leading Mental Health Charities. I have been in contact with some of them and they confirm their knowledge of ME is limited; as you would expect.

A diagnosis of Functional Somatic Syndrome is a serious matter. I am extremely concerned about the enormous potential for iatrogenic harm plus the negative impact on service provision,  as a consequence of the information supplied by the JCPMH to Commissioners.

This is not the first time that an incorrect reclassification has been attempted. In October 2001 an attempt was made to have ME ‘unofficially’ reclassified, as a mental disorder in a U.K adaptation of a WHO publication, the ‘WHO Guide to Mental Health in Primary Care’, developed by the Collaborating Centre of the Institute of Psychiatry, London and included under the classification F48.0 “Unexplained medical symptoms.”  After a reprimand from the WHO, an erratum was eventually issued, acknowledging  the wrong classification.

"Guidance for Commissioners of services for people with medically unexplained symptoms – practical mental health commissioning" needs retracting now because it is incorrect.

What can you do to ensure that the JCPMH guidance on MUS  and the inappropriate inclusion of  Myalgic Encephalomyelitis is immediately withdrawn?

What can you do to ensure that Commissioners are correctly informed about ME as a neurological disease, not a mental health disorder ?

Regarding the overall concept of "MUS" itself, there are no lab tests, brain scans, X-rays or chemical imbalance tests that can verify it, that in itself should question its validity; an "MUS" diagnoses cannot even claim to be based on science. There is no justification for trying to subsume any physical disease, without a shred of proof, under it.