NICE does not list ME as a Functional Somatic Disorder 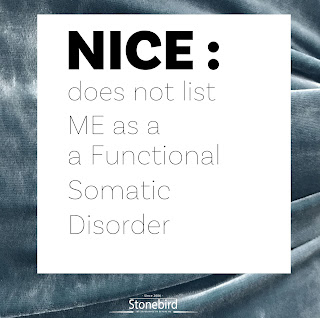 In their  letter to me dated March 2nd,the Joint Commisioning Panel for Mental Health  (JCPMH) claim that their "Guidance for commissioners of services for people with medically unexplained symptoms" which lists Myalgic Encephalomyelitis as a "Functional Somatic Disorder", in other words a mental disorder,  is "in line  with NICE guidelines and with current practice."

That is simply wrong.

I wrote  to NICE on March 13  to clarify whether the JCPMH Report is correct in stating that  ME is a somatoform disorder.  They confirmed (March 15) :

"Thank you for contacting the National Institute for Health and Care Excellence (NICE) regarding our guideline chronic fatigue syndrome/myalgic encephalomyelitis (or encephalopathy): diagnosis and management (CG53)

We have not listed ME as a functional somatic disorder in the above guideline and unfortunately I am unable to comment on the report issued by the Joint Commissioning Panel for Mental Health."

It is a profoundly serious issue that the JCPMH, while claiming to act in accordance with NICE, has misinformed Commissioners that ME, a WHO Classified Neurological Disease is a "Functional Somatic Disorder."

The JCPMH needs to notify Commissioners immediately  that its guidance is wrong.

It also needs to withdraw  Myalgic Encephalomyelitis  from its wholly inappropriate  inclusion in  :"Guidance for commissioners of services for people with medically unexplained symptoms."

The implications for patients, of this wrong classification,  are vast and unquantifiable.

None of the big ME Charities, however, seem to be doing anything about getting the JCPMH Report retracted.