Why ME must be removed from the JCPMH Report : Guidance for Commissioners of Services for People with Medically Unexplained Symptoms 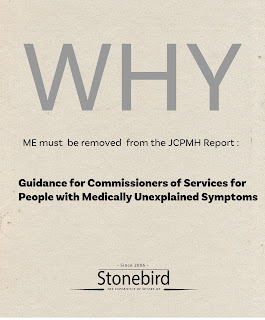 The Joint Commisioning Panel for Mental Health has recently published "Guidance for commissioners of services for people with medically unexplained symptoms,
specifically listing Myalgic Encephalomyelitis as a "Functional Somatic Disorder".

This is not the first time that an incorrect reclassification has been attempted. In October 2001 an attempt was made to have ME ‘unofficially’ reclassified, as a mental disorder in a U.K adaptation of a WHO publication, the ‘WHO Guide to Mental Health in Primary Care’, developed by the Collaborating Centre of the Institute of Psychiatry, London and included under the classification F48.0 “Unexplained medical symptoms.”

After a reprimand from the WHO, an erratum was eventually issued, acknowledging that the wrong classification.

For anyone wishing to challenge this report, the following may be of interest.

Myalgic Encephalomyelitis (ME) has been recognised by the World Health Organisation since 1969 as an organic neurological disease, classified under ICD code G93.3. ME patients report worse pain than patients with rheumatoid arthritis or multiple sclerosis, conditions in which pain is recognised as a major symptom (Marshall et al 2010).

ME has a greater impact on functional status and well being than other chronic diseases such as Cancer, (Nacul et al 2011). In 1986 Ramsay, who followed many of those who fell chronically ill during an 955 epidemic for up to 34 years, until he died in 1989 (Hyde 1998), commented: “the too facile assumption that such an entity-despite a long series of cases extending over several decade -can be attributed to psychological stress is simply untenable.”

There was a time before the mid-1980' s, when ME was taken so seriously that an ME Bill was put before Parliament. The Bill required an annual report to Parliament: ' It shall be the duty of the Secretary of State (for Health) in every year to lay before each House of Parliament a report on the progress that has been made in investigating the causes, effects, incidence and treatment of the illness known as ME.'

Hansard (House of Commons) for 23rd February 1988 at columns 167-168 records: ' There is no doubt that ME is an organic disorder. The sufferers are denied proper recognition, misdiagnosed, vilified, ridiculed and driven to great depths of despair. ' (Williams 2010)

Way before the involvement of the psychiatric lobby ME was properly seen as the major public health risk that it is. For almost three decades, the psychiatric lobby despite the failure of scientific research to reveal any specific biological marker for any psychiatric diagnostic category, has dismissed the international biomedical evidence that ME, insisting that it is a mental (behavioural) disorder which can be cured by graded exercise and “cognitive re-structuring”. (Williams 2017)

There are now over 9,000 peer-reviewed articles describing the complex biomedical pathology of ME, yet this powerful group of psychiatrists, with "fixed views" who "torture data" (Vink 2017), continues to believe and assert that ME is an “aberrant illness belief” and that all patients with ME are really suffering from a mental illness, ie. somatisation.

Their so-called "biopsychosocial model" a " prime example of assumption and opinion-based medicine at a time when medicine should be evidence-based", (Vink 2017) is based on the assumption that individuals are suffering from maladaptive thinking. Their symptoms, the psychiatrists argue, are "not symptoms of illness but merely symptoms of deconditioning."

ME is not a Functional Somatic Syndrome (FSS)

A diagnosis of Functional Somatic Syndrome is a serious matter; the implications of misdiagnosing a serious neurological illness as a neurotic illness hardly bear thinking about.(cf Kemp 2012)

Myalgic Encephalomyelitis (ME) is listed in the International Classification of Diseases (ICD), chapter 6, under Disorders of Brain at ICD-10 G 93.3. It is not classified as a mental health disorder.

Following publication of the International Consensus Criteria in 2011, the Consensus Panel, a group of doctors with over 500 collective years experience of studying and treating more than 50 000 people with ME, issued a one stop, user-friendly reference in 2012 known as the Primer (Carruthers B et al 2012), that specifically targets primary care physicians and specialists in internal medicine. It very strongly affirms that ME is not CFS and outlines many underlying biological abnormalities that are present more often in patients with ME.

The involvement of psychiatry in ME, however, has lead to a situation where physical causes are not sought and even argued against or positively proscribed. The tests required to prove the disease are not being widely offered , developed or easily developed. People with ME are trapped in a cycle where their physical disease is denied and where this is seen as justification of Functional Somatic Syndrome label. It is the perpetrators of the psychosocial paradigm who have helped create this nightmare environment, by their misinterpretation of ME.

In the current climate patients with ME are massively at risk of having their physical reality denied.
In 2015 the influential USA Institute of Medicine, stressed that ME is a medical, not a psychiatric or psychological illness.(IOM 2015)

The National Institute of Health ( USA) concluded in 2015 that the criteria the psychiatrists use, the Oxford Criteria are flawed and should not be used anymore.

Last year the USA Agency for Healthcare Research and Quality, found no evidentiary basis for the use of CBT/GET in ME.(Johnson 2016)

In the UK the controversial PACE trial, the largest Cognitive Behavioral Therapy (CBT) and Graded Exercise Therapy (GET) trial for Myalgic Encephalomyelitis/Chronic Fatigue Syndrome (ME/CFS) conducted thus far, has dominated and influenced policy, however recently it has been exposed as a failure, there was no “recovery” and up to 96% of participants may have had their health adversely affected . (Vink 2017)

The ME Association, based upon member’s experience has explicitly stated that CBT and GET have no role to play in the management of ME (MEA 2015)

The 25% Group and Stonebird surveys (Crowhurst 2005 and 2007) of the most severely affected, for example, showed that 95% of members were made worse by Graded Exercise and Cognitive Behaviour Therapy.

In a joint statement Stonebird and the 25% Group called for the removal of psychiatry from front line involvement in ME. (25% Group)

ME has no place in this document.

That needs raising far and wide.

Bell and Lapp (1999). Letter to the editor of the Annals of Internal Medicine. Newsletter AAFCFS, Aug/Sep. 1999.

MEA (2015) “No decisions about me without me” http://www.meassociation.org.uk/how-you-can-help/introduction-to-our-cbt-get-and-pacing-report/

Nacul et al (2011) The functional status and well being of people with myalgic encephalomyelitis/chronic fatigue syndrome and their carers. Public Health. 2011 May 27;11:402 http://www.ncbi.nlm.nih.gov/pubmed/21619607

Williams M (2010) Evidence that the official UK position is that ME/CFS is a neurological disorder http://www.mecfsforums.com/wiki/Evidence_that_the_official_UK_position_is_that_ME/CFS_is_a_neurological_disorder