This is not an argument with psychiatry. Really ? 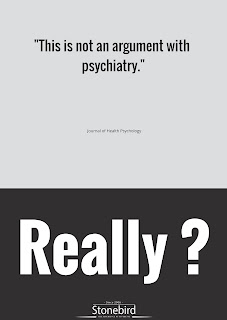 Charles Shepherd's otherwise excellent article in the Journal of Health Psychology, contains the puzzlingThis is not an argument with psychiatry", maybe he's right on one level, if psychiatry had properly acknowledged the physical reality of the illness,instead of working to re frame it as a mental illness.
quote "
In that sense it's true.
However there must be an argument with the psychosocial misrepresentation of ME as practised by the so-called "psychiatric lobby".
http://journals.sagepub.com/d…/full/10.1177/1359105317703786

To this day the psychiatric lobby dictates :


To this day the psychiatric lobby :


To this day the psychiatric lobby :

For us, the argument is very much with psychiatry !!
The psychiatric lobby must be held accountable, surely.