DECADES OF PSYCHIATRIC SWAY AND INFLUENCE 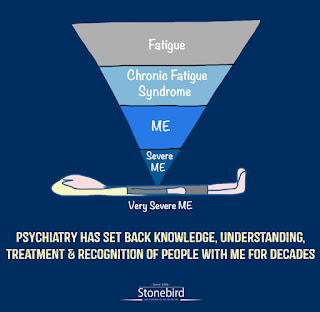 Psychiatry, not just the PACE trial, has set back knowledge, understanding, treatment and recognition of people with ME and other poorly diagnosed illnesses for decades, encouraging weak diagnostic criteria that identifies no one, a focus upon a vague symptom of fatigue that is not necessarily even present in ME and non -investigation of serious symptoms.
The influence of psychiatry upon the neurological disease, Myalgic Encephalomyelitis, dates from way before the PACE trial, which failed to back up any of the claims Psychiatry makes about the effectiveness of a psychosocial approach, which NICE unfortunately bought into, heavily skewed by psychiatric representation on the Guideline Development Committee for CG53 in 2007.
One of the problems facing the creation of new NICE guidance is that the biomedical expertise needed to create an appropriate and safe biomedical pathway is not there in the UK, because of decades of psychiatric sway and influence.
There is no biomedical national pathway or specialist ME Centre. The only test that was developed to identify the enterovirus, the VP1 test has long been withdrawn.
Practitioners are consequently free to decide whether they even believe ME exists, apart from in the mind of the sufferer and is a physical disease at all, because of the lack of commitment by the government, the health service and NICE, to protect those with it, specifically, under the diagnosis of the WHO neurological classification G93.10.3ME.
Patients are left at the mercy of a psychiatric- inspired fatigue service, offering dangerously inappropriate graded activity management or graded exercise programs and cognitive behaviour therapy, aided by the conflation of ME with CFS, despite one being more narrowly defined and specific and the other being more widely and loosely interpreted, focusing primarily on fatigue.
Their presumption is that the illness has continued due to wrong thought and deconditioning.
If they are too ill to leave their homes, patients are simply left for decades, with little or no appropriate, safe , clinical input, poorly investigated, open to misinterpretation, lacking in physical support, proper recognition and wrong or no treatment.
No one with an ME diagnosis is currently safe, all the time this confusion and conflation continues. Due to poor diagnosis, poor identification criteria such as the vague Oxford criteria, and poor commitment to investigate, it is unlikely that everyone with a diagnosis actually has ME at all.
(FROM : A New Vision : http://www.stonebird.co.uk/vision/index.htm)