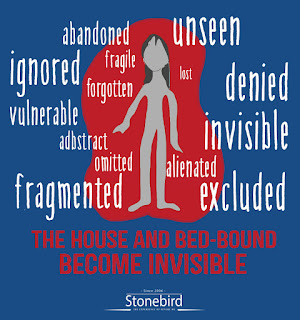 The house and bed-bound become invisible. The most severely ill, left chronically neglected, are at
constant risk of harm or deterioration or misinterpretation and psychiatric abuse, even sectioning.

Those who are not so severely ill, but perhaps more so than those who can easily attend clinics, remain semi-visible and are likely to be described by clinicians who do not see the worst suffering as having Severe ME, when this is not necessarily the case.
The most severe experiences are not necessarily seen nor fully comprehended, people who push themselves to see consultants, then deteriorate significantly afterwards as a consequence, once home again may also not be seen in their worst or post-exertional state.
If people can only be seen when at their apparent best, the true nature of the disease and symptoms and their experience will be invisible. Furthermore, if tests can only be done in moments of potential tolerance, the outcomes may be very different.
The issue may be easily missed if measurements fluctuate depending on the presence of symptoms, such as Periodic Paralysis.
The real illness disappears from view and those with it are endangered by a system that does not recognise them, does not know how to help them and is likely to judge or blame patients rather than own their own culpability and responsibility. Or worse still, say their is no cause for their symptoms.
Patients meanwhile are expected to jump through endless hoops in order to obtain vital benefits and care, reassessments that are impossible to bear and endless proofs that are difficult to provide, are demanded, yet at the same time, under psychiatric influence, the necessary tests are proscribed by NICE.
This must change in the new guidance.
Psychiatry misrepresents ME as “medically unexplained”, when in fact it is “medically ignored”, misinforming doctors and health professionals.
Despite writing to the government, the Health Service, NICE and the Royal Colleges and several charities involved in the JCMPH, we could find no willingness to change the misinformation and no one willing to deal with the error to ensure Commissioners were made aware of it.
The clinical input required is unavailable unless you have the money to pay privately and even then it may be unreliable or unsafe. Everyone is different and needs an individual approach. Anyone could have a missed alternative or comorbid diagnosis under the current regime.
Regulated biomedical training should be standardised and provided, but only if it is correct and free from psychiatric misinterpretation.
The real question is who will do it and ensure it is correct?
Down the years we have witnessed and experienced being harmed by ignorant practitioners, being misinterpreted, being downplayed by ignorant neurologists, being lied about and misreported , left without thorough investigations or coherent explanations as a consequence.
My wife says, “The worst betrayal was by people who insisted they could help, then harmed horrendously instead and left me so damaged that I was literally tortured by normality, was completely cut off from everyone and everything and harmed by every sound and interaction, made a million times worse than my very severe level of illness to start with, which made life intolerable for us both and left us with no hope, traumatised and judged wrongly. I still have not recovered many years on, even to my previous level.”
Trust is a fragile thing. The trust of those with ME needs completely rebuilding.
Psychiatric involvement and influence has to be acknowledged as inappropriate and not wanted.
A strong message by NICE must be given on this point and followed through, for the new guidelines to be effective and of help.
We have all been massively let down so far; the new NICE guidelines must begin to restore trust and faith in the medical profession and the health service in its dealings with ME specifically.
There must be a biomedical focus and acknowledgement of the true nature of the disease.
(FROM : A New Vision : http://www.stonebird.co.uk/vision/index.htm)