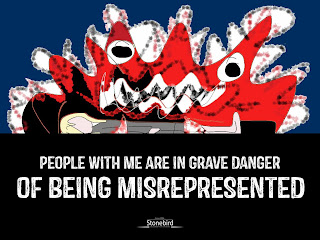 A UK debate is raging right now that has profound implications for the whole ME Community. To what extent should we accept the psychosocial model, because there is no alternative?
This issue can only be tackled, we suggest, by taking a step back and looking at the wider picture; the concept of death-making is a particularly useful framework from which to begin.
Death-making is concerned with society's potential to bring death not life to those it does not value, this includes people with a disability, the poor, prisoners, street people, native populations, the elderly, the contagious, the chronically ill, the terminally ill; any group of people that is perceived as a threat or that has been demonized.
Any practice, action or thought that considers a person to be less than human, less than valid, less than equal, is potentially a death-making one.
People or groups that society do not value often suffer the "wounds" of being regarded as:
a/.Non human
b/.A menace / object of dread
c/.A threat to the norm
d/.Waste material, garbage, discard,excrement
e/.Not be taken seriously
f/.Invalid
g/.An object of ridicule
h/.An object of pity
i/.A scrounger, malingerer hypochondriac, manipulator, user.
j/.Childish, immature, irresponsible ,unreasonable, demanding
k/.Better-off dead
l/An economic / emotional burden
m/.A waste of space.
(cf. Wolf Wolfensberger (1994). The Growing Threat to the Lives of Handicapped People in the Context of Modernistic Values, Disability ; Society, 9(3), 395-413.)
A notorious example of death-making was the Nazi's putting to death of sick and disabled people in German killing centres , as an "act of mercy", the lebensunwerten Leben; the "life unworthy of life", echoing sentiments that date back as far as Plato and taking place, as today, against a background of deadly propaganda masquerading as legitimate scholarly research.
When you look at its underlying messages, its disregard for the truth and its terrible impact upon people with severe ME the psychosocial stance stance, we have long suggested, can be considered as a death-making one.
Our own research, for example, uncovered a shocking picture of severely physically ill ME sufferers being:
1.labelled as psychiatric patients
2.being treated with contempt by many GP's, doctors and nurses
3.being locked in secure units and shut in AIDS wards
4.being refused food
5.being forced to participate in inappropriate graded exercise and behavioural therapy, designed to convince them there is nothing seriously wrong with them. and that proper physical testing should not be encouraged.
(http://carersfight.blogspot.co.uk/…/severe-me-patient-surve…)
I have outlined in “Straightjacketed By Empty Air” how the psychiatric lobby lobby proceed on the basis of a vague sham diagnosis of “CFS” rather than the strict Ramsay -defined truth of neurological /enteroviral ME. They say : let us make it a syndrome rather than a disease, let us call it "CFS", let us bury ME in a host of confusion and vague illnesses and then say we know how to 'treat' it using rehabilitation techniques.
(http://stonebird.co.uk/emptyair/index.html)
These are extremely dangerous times for the physically ill ME sufferer, who is left to flounder for decades without any medical support or back up, monitoring or treatment, who may be given a wrong or minimised prognosis, who will not have had all or any of their symptoms investigated appropriately and is most likely struggling to obtain benefits and appropriate GP support.
Above all, they are in grave danger of being misrepresented by people and organizations that will not truly represent their needs.
In the up - coming negotiations with NICE, patient representatives need to step back from the minutiae of issues and see the bigger picture and look at the wholeness of their values, principles and intentions.
There is no compromise on the truth of ME, to do so, is to embark on a slippery slope downwards towards relativism and away from truth ; miles away from any hope of proper research, treatment and a cure.
In short there are only two ways anyone representing people with ME can go:
1. Life-bringing: from the truth to the truth, with honesty and integrity.
2. Death-making:slick, glossy, in an ever wider circular cover-up of denial and manipulation; and this begins the moment we compromise our values.
There is no sitting on the fence .
There is no balance to be struck between a psychososocial and a biomedical approach.
People have died / are dying right now from ME.
(c) Greg Crowhurst March 2018