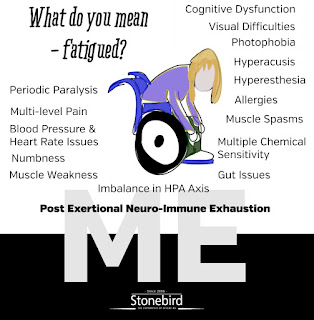 ME is currently being misrepresented and misinterpreted as CFS, a fatigue condition with treatable sleep, pain and fatigue,  for example in the latest NICE Scope document.
This does not represent the reality of ME, especially that of the most severely affected, who experience severe multi-system dysfunction and neurological symptoms.
ME is characterised by Post-Exertional Nueroimmune Exhaustion (PENE), unlike normal fatigue, proportional to the intensity and duration of the person’s activity, PENE is
characterised by a pathological low threshold of physical and mental fatigability, exhaustion, pain and an abnormal exacerbation of symptoms, involving a profound dysfunction of the regulatory control network. ((Carruthers et al 2012)
Profound fatigue is common in neurological diseases such as Parkinson’s disease, multiple sclerosis, post – polio syndrome. ME fatigue, however, is actually worse than post-cancer fatigue.(Meeus et al 2009)
Fatigue and severe disability are accepted and valid features of Cancer, but when you use these words in relation to ME the interpretation changes, despite the fact that cancer and ME have many overlapping symptoms; cancer is taken as a serious physical disease and ME is treated psychosocially.
Someone who is physically ill may experience fatigue but fatigue itself does not define the illness, in the unfortunate way it has come, wrongly, to define ME. Important physical malfunctions, recognised in Cancer, such as malfunctioning natural killer cells,are awarded serious recognition in a disease like Cancer, but unfortunately, despite their presence in ME, they are barely taken into account.
References:
Carruthers B et al (2012) Myalgic Encephalomyelitis -
Adult & PaediatricInternational Consensus Primer for
Medical Practioners
International Consensus Panel
http://www.hetalternatief.org/ICC primer 2012.pdf
Meeus M, Mistiaen W, Lambrecht L, Nijs J. (2009)
Immunological similarities between cancer and
chronic fatigue syndrome: the common link to fatigue?
Anticancer Res. 2009 Nov;29(11):4717-26.
An extract from "Severe ME Featuring Justice For Karina Hansen"
http://www.stonebird.co.uk/severemebook/severeme.html