THE CRUSHING PHYSICAL BURDEN OF ME 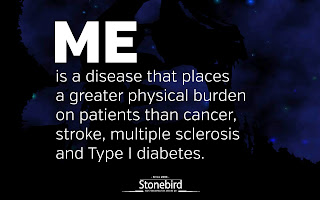 There is clear evidence that ME is not the same as depression or any other psychiatric disorder. In 2015, the influential USA Institute of Medicine, stressed that ME is a medical, not a psychiatric or psychological illness.(IOM 2015)
Neuroinflammation has been found to be widespread in the brain areas of the patients with ME and is associated with the severity of their neuropsychological symptoms, (Nakatomi 2018).
There are over 9000 articles in peer-reviewed medical journals showing frank biological pathology in ME.
Evidence of ME as a chronic physical illness has been growing for decades; there is now irrefutable evidence of ME as a complex multi-system illness with neurological, immune, endocrine and cardiovascular dysfunction.
Many diseases have been linked to selected channelopathies including diabetes mellitus, dilated cardiomyopathy and cystic fibrosis. (Phoenix Rising 2012) Every ME case definition concludes that Post Exertional Malaise is an essential feature of ME; a small but compelling literature, according to Jason (2015), shows “ that PEM may involve channelopathies”.
Acheson stated in 1959 : “broadly speaking, the epidemic cases have fallen into two groups: patients with definite localised muscular paresis, and those without.” (Acheson 1959); in our long experience we believe that is is likely that a channelopathy, causing flaccid muscle paralysis underpins ME. (Crowhurst and Crowhurst 2017)
The only thing that will keep patients with ME safe are biomedical tests that will prove there is physical dysfunction and accurate biomedical interpretation . Yet this is currently denied the vast majority of patients with neurological ME.
References
Acheson E.D.(1959) The Clinical Syndrome Variously Called Benign Myalgic En-cephalomyelitis, Iceland Disease and Epidemic Neuromyasthenia http://www.name-us.org/…/DefinitionsArticles/Acheson1959.pdf
Crowhurst G&L (2017)Channelopathy : an important issue for those with Myalgic Encephalomyelitis.http://stonebird.co.uk/channelopathy/paralysis.htm
Jason et al (2015) Myalgic Encephalomyelitis: Symptoms and Biomarkers
https://www.ncbi.nlm.nih.gov/pmc/articles/PMC4761639/
Nakatomi Y (2018) [Neuroinflammation in the Brain of Patients with Myalgic Encephalomyelitis/Chronic Fatigue Syndrome].Brain Nerve. 2018 Jan;70(1):19-25. doi: 10.11477/mf.1416200945.
Phoenix Rising (2012) A Neurological Channelopathy in Chronic Fatigue Syndrome (ME/CFS) ?http://phoenixrising.me/…/a-neurological-channelopathy-in-c…