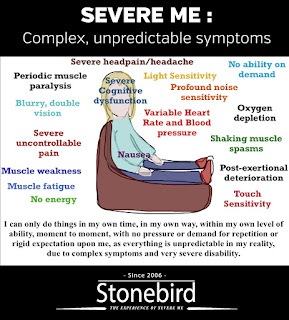 Stonebird
The psychiatric lobby continues to argue that “CFS/ME” is a “functional somatic syndrome” (ie. a
behavioural disorder) in which medically unexplained fatigue is perpetuated by inappropriate illness beliefs, pervasive inactivity, membership of a self-help group and being in receipt of disability benefits.

It asserts that there are no physical signs of disease, no pathology causing the patients’ symptoms, and that because patients are merely “hypervigilant” to “normal bodily sensations”, the illness should be managed by behavioural interventions to “reverse” patients’ “misperceptions”.(Hooper 2012)
Even though it has been shown, through the failure of the PACE and FINE Trials, how the term “CFS/ME” is an hypothesis that “is scientifically bankrupt “ and absurd. (Tuller 2017), it is still used in the recently published BACME Guideline on Severe "CFS/ME".
All those who represent people with ME should be insisting, in the strongest possible terms that :
1. The term "CFS/ME" not be equated with WHO ICD10G93.3 Myalgic Encephalomyelitis. It must be made very clear to BACME that their Guideline on "Severe CFS/ME" has nothing to do with ME.
2. The biopsychosocial approach which for decades has denied people's physical  reality, at incalculable personal cost, must finally be eradicated from all ME care.
3. A biomedical response and care pathway must urgently be developed; lives are at risk. Everyone with Myalgic Encephalomyelitis deserves correct medical support and excellent care!
REFERENCES
BACME (2019) Working Group on Severe CFS/ME, Shared Clinical Practice Document, Version 2 January 2019 https://www.bacme.info/…/BACME%20Severely%20Affected%20Shar…
Hooper M (2012) Professor Simon Wessely’s award of the inaugural John Maddox Prize for his courage in the field of ME and Gulf War Syndrome Professor Malcolm Hooper (with members of the ME community) 12th November 2012
http://www.hetalternatief.org/Hooper%20Wessely%20Maddox%20P…
Tuller D(2017) Trial By Error: My Brief Encounter with Professor Crawley
20 NOVEMBER 2017 http://www.virology.ws/…/trial-by-error-my-brief-encounter-…