Stonebird Review of Dialogues from a Neglected Illness 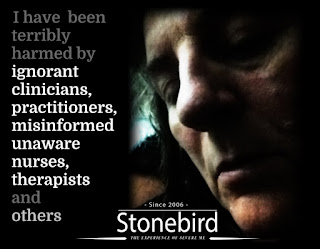 With a wealth of moving and harrowing material, this series of Videos informs, illuminates and manages to convey something of what the most severe ME patient is going through. As Stonebird provides information and raises issues pertinent to Very Severe ME, that is what this review will focus on.

On a practical note there were problems opening the videos on the website, one contributor’s voice was completely missing when played, repeatedly, so that content and important information was missing from the Management of Very Severe ME video; the film also froze repeatedly and would not continue at one point.
Some of the other films would not open at all or froze too. That could be very disruptive and off putting, especially to anyone with visual and cognitive disability or with depleted levels of energy. We do not know how widespread this issue is or why, but it did make it hard to watch and review the material.
We also found that some of the written material was not displayed long enough on the screen to read, process and understand, particularly those with long lists and sentences, making it potentially very difficult for people with severe cognitive issues to follow or take in quickly enough. The font was difficult to read easily.
The film's titles combining both “Chronic Fatigue Syndrome “and “Myalgic Encephalomyelitis” are hugely disappointing. Neither phrase is explained as to its meaning or accuracy, particularly in context of the biopsychosocial expansion of the term to mean something quite different to the original Enteroviral Disease, coined by Ramsay.
Watching all three films together gives the most comprehensive overview, but for people who are severely ill that is a big ask. It is vitally important, however, that they know just what is being said about their illness, how it is being represented and what is being used to educate others on their behalf, particularly medical practitioners.
Each film will now be reviewed:

This is an excellent video highlighting the very real issues facing patients in getting appropriate, safe hospital and dental treatment.
It is extremely moving to hear how people have received right care as well as recognising and highlighting the dangers of deterioration, even death, from wrong attitude and approach.
We would have liked paralysis to have been included; the difficulty of caring for someone who is transiently or periodically or permanently paralysed is extremely vulnerable, especially if it is not recognised as such, which seems to be the case in ME.
We would also have like to see the how of caring mentioned, not just the environmental and practical needs, which obviously are essential.
It is really helpful, we feel, to highlight the possibility of accessing the support of a Palliative Care team, who will have understanding of the type and level of of care required.
This film was very moving to watch. It is uplifting to see the very real difference in approach that is possible but still not remotely present for most patients, sadly.

There is no specific reference, in this series of Videos, although there may be else where on the website, to the major reason why people are left in the state that we see in the films, misrepresented, misinterpreted, mistreated, neglected, with little or no understanding of the best and safest ways to interact and support them: the biopsychosocial context in which ME has been deliberately framed for decades.
The biopsychosocial model’s assumption and influence, that there is no underlying pathology in ME, that it is “all in your head” is a major factor in the institutional prejudice and stigmatisation that people with ME have suffered for decades.
Without specific reference to the deleterious influence of psychiatry on current health service provision, the film could leave the viewer with the impression that if one can get a home visiting service, then they would get the right support, which is far from certain, unfortunately. The fundamental beliefs of the practitioners that people are exposed to, particularly if the practitioner subscribes to a biopsychosocial point of view, are crucial to recognise. The affect of these attitudes and the treatment that goes alongside them is clearly evident in the video material.
There also appears to be a dearth of older people being represented visually, giving the false impression that this is primarily a disease of younger people, who can recover to a degree, if managed well. Without a cure, how many people have been left for decades, ageing, without adequate input, barely clinging on to life? This older group is not well represented.
It would have been extremely helpful to emphasise the need for a Risk Assessment before any intervention, for the most severely affected, alongside the fundamental principle to do no harm.
Pacing is mentioned in the Management of Symptoms Video, however, it could have been stressed how insidious “Pacing” is, as interpreted by the biospychosocial model. Rather than conserving energy, it is perversely attached to eliminating “unhelpful beliefs” and graded exercise or graded activity management; the worse possible intervention in ME.
In any case, pacing for the most severely ill is unrealistic and unachievable.
The website claims that Dialogues is a work in progress, it is hoped that these issues might be addressed, particularly regarding the definition, the risks of any intervention, no matter how well intended and specifically, the representation of paralysis and the written information overall better presented to equal the video material, in the near future.