Showing posts from June, 2012
Show all

June 26, 2012
#CFS means that you agree to being: Comprehensively F*****d & Screwed By a Corporate Favoured Strategy To Carefully Fabricate & Suppress the Truth of ME Drop it, already !
Post a Comment
Read more 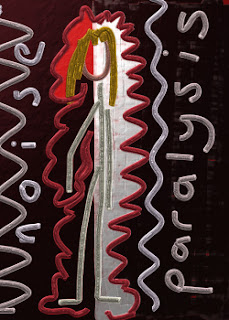 This evil : the global biopsychosocial regime. Learn from the experience of people with ME

June 24, 2012
Before the Coalition came to power , Steve Webb, Liberal Democrat work and pensions spokesman, commented in relation to the Labour Government's Welfare to Work programme :  " The rhetoric sounds great – 'We're going to focus on what you can do and not what you can't do' – but we all know that what that really means in practice is getting tougher and setting the bar higher ." He added : " What worries me is the idea of a future Tory government going further, faster down this track and already budgeting for millions of savings, saying there's obviously people who don't need this money. "  How ironic !  With little protest , Labour's Welfare to Work programme found seriously ill people, people with debilitating conditions and serious disabilities illegible for Employment and Support Allowance (ESA), the benefit that replaced Incapacity Benefit in October 2008. That is because they had been subjected to the notorious Work Capabi
Post a Comment
Read more

The detrimental effect of noise in Severe ME

Liberating the NHS ?? My foot !

June 23, 2012
Still conducting my background research into the Government's NHS Consultation on "Choice" , it is instructive  to look at the powerful players who are busy  "Liberating  " the NHS budget to hand it over to the corporate sector ." ( Ayes To The Left   Save Our NHS - "DROP THE BILL"!  Monday, March 21, 2011  http://cameron-cloggysmoralcompass.blogspot.co.uk/2011/03/nhs-reforms-and-tory-donors-what-does.html )   As Dr Clarke points out : since 2001, the Tory Party have received at least 333 separate donations from companies or individuals with links to the private health care industry.  The Green Benches  Dr Éoin Clarke (PhD) http://eoin-clarke.blogspot.co.uk/2012/02/333-donations-from-private-healthcare.html We, in the ME Community have suffered horribly from the influence of powerful vested interests, over the last 20-30 years, it is even more profoundly shocking and disturbing then ,  when you begin , as I am, to look into who is
1 comment
Read more

When will there be genuine hope?

When the pins and needles first came I simply could not shake them away. They would not go no matter what I did. Dead limbs refusing to shift. Then the pain came : Shooting, stabbing, throbbing, burning, agonizing  , unrelievable  pain And never left Just silently crept into my neck, Into my hands and feet Up my arms, Up my legs Higher and higher. I could feel it taking me over And could do nothing to stop it. I rested, oh yes, I rested Week after week after week Month after month after month I lay tormented Whilst my doctor denied My physical reality And resented the demand to visit me at home. The pain continued, Yet there was a numbness too Over all my limbs. The inability to function Came first with sleep Yet  paralysis dominated every  waking hour Massive headaches Facial palsy Face pain Lips numb. Hydrotherapy brought Shaking spasms Hour after hour shaking without cease, Yet still no explanation No treatm
1 comment
Read more

June 22, 2012
Stonebird published a " Severe ME response to Liberating the NHS, Greater Choice and Control", which can be accessed here : http://www.stonebird.co.uk/now1.pdf Back in May the Government acknowledged the responses :   http://data.parliament.uk/DepositedPapers/Files/DEP2012-0834/LiberatingtheNHS-GreaterChoiceandControl.pdf   We now  have until Friday 31 August ( the date has been extended from July)  to respond to   Liberating the NHS: No decision about me, without me – Further consultation on proposals to secure shared decision-making  (  http://www.dh.gov.uk/health/2012/05/choice-consultation/ )  which I hope we can do. In preparation ,  I have been doing some background research ;  this excellent piece from Abetthern's Blog (  http://abetternhs.wordpress.com/2011/09/29/point/ )    surely  is essential reading : The purpose of the reform is “to increase competition” which decodes as “to get the private sector access to the NHS budget”.  See  this speech b
Post a Comment
Read more

June 21, 2012
A fantastic, committed  site has been set up for carers ,but on my visits there, it sadly feels a little  windswept and empty, pretty much like the beach near me, I am afraid,  on this  grey rainy day. Why ? I can only look to my own experience. I need a site that will HELP me. I see, for example that Carers UK have just announced yet another survey into something or other that will make a "difference". All very well  - but I am crying out for effective action to make change happen. Carers need proper financial support to do their job and care for themselves.  In all these years of campaigning Carers UK have  not managed to put anything more than the 20p an hour I receive , in my pocket. To that extent, I am afraid they are ineffective. I just  don't need any more  advice,  please,  on "looking after myself". Me,  I  want to live within and beyond caring in an enriching way, in partnership with my wife - I  do not want to be   clientised or to  feel
Post a Comment
Read more

June 21, 2012
"To Summarise: I would urge all our colleagues to look again at the literature prior to 1988 before redefining this illness. ” Dr Betty Dowsett , Redefinitions of ME/CFS – a 20th Century Phenomenon. We have just heard the incredibly sad news that Dr Betty Dowsett, one of the very few doctors who knew that ME was a genuine neurological disease , who actively validated patients in a sea of psychiatric fatigue nonsense, a doctor who worked alongside Dr Melvin Ramsay, who knew the truth has died. Betty Dowsett helped people, by protecting against the psychiatric untruth that has spread like wildfire throughout the UK since the 1980's, by accurately diagnosing them , by actively supporting them Not only did Betty help many people, for free, including Linda to get a proper Severe ME diagnosis, at a clinic she paid for herself, because the need was there, she also stayed in touch , supporting people in getting their Benefits and providing ongoing medical advice. Deeply
Post a Comment
Read more

A letter to my local Labour Party - will I get an answer ?

June 19, 2012
I have just received your North Norfolk  newsletter.  My wife is chronically sick and disabled. Last time we spoke to a Labour Party member, back in 1995, they said to us 90% of the sick and disabled are scroungers.  Although the MP at the time refuted it, New Labour's policies subsequently proved that they considered the sick and disabled "scroungers",  from the Benefit Integrity project, the  introduction of ESA, the employment of ATOS, Labour's involvement with UNUM -  and the way it was allowed to profoundly dictate Labour's Welfare to Work policy. I am desperate to support a genuine Social Democrat party, but am deeply disillusioned by our experience under the last Government, and the way that Labour is still not speaking up against the dangers and use of PIP and the ongoing demonisation of the sick and disabled, the poor and unemployed,  rather than the bankers . Please can you tell me what has so fundamentally changed that I might now want any invol
Post a Comment
Read more
More posts