Showing posts from December, 2018
Show all

WE NEED TO NAME WHAT WE WANT TO REPLACE THE PSYCHOSOCIAL APPROACH. 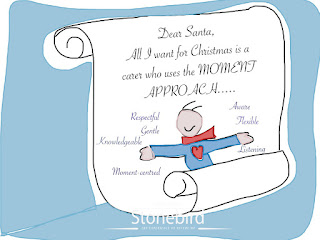 It is all very well people with ME demanding no more CBT and GET, it is all very well organisations around the globe writing to the WHO but that is not enough! Not by a long shot. We MUST specifically NAME exactly WHAT we WANT to replace the awful, predominant psychosocial paradigm. Terrifyingly even if CBT and GET were withdrawn, people with ME, especially the most ill, are still extremely vulnerable to being misunderstood, disbelieved, denied even. That attitude, ask anyone, runs very, very deep in society, in families, in relationships. People with ME need an incredibly sensitive AWARE approach, one that specially acknowledges the FULL medical reality and impact of their disease, that respects and works in partnership with them and ACTUALLY meets THEIR need, moment by moment. As I explain below, for many years we have called that the MOMENT Approach. Rooted in a value system that believes in the integrity and equality of person-hood of the other, alongside a deep b
Post a Comment
Read more

THE PARADOX OF CARING FOR PEOPLE WITH SEVERE ME : why a MOMENT APPROACH is necessary. 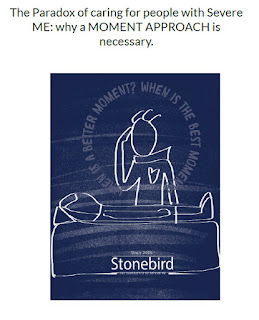 This new Stonebird guide explores the paradoxes that may only become apparent when you try to engage with and care for people with Severe /Very Severe ME. At the worst of the most severe end of Severe/ Very Severe ME, where nothing is possible and everything is a torment or a torture, accessing much needed care, with so many broken communication pathways, is a massive challenge. It is not necessarily obvious as to how and when to interact safely with the person and in the best way. This Guide advocates a person-centred, moment-centred, moment aware approach to care. http://stonebird.co.uk/Paradox.pdf
Post a Comment
Read more

CARING FOR SOMEONE WITH SEVERE ME : GREAT WISDOM AND SKILL IS REQUIRED. 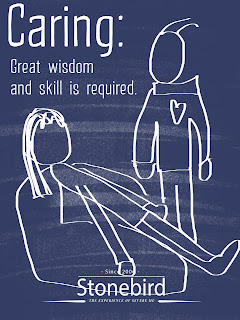 Within ME there are a range of complex physical symptoms and system dysfunctions, all affecting the 'how' and 'when' a carer interacts with the person; getting it wrong can lead to enormous harm! To care safely and effectively for someone with Myalgic Encephalomyelitis, carers absolutely must: 1. Be aware that ME is a neurological disease with multi-system dysfunction. 2. Always trust and listen to the person and their reaction. 3. Be sensitive so that they can gently approach and offer care to the person without causing distress or deterioration. 4. Adopt a moment - by - moment, flexible approach to care, where the carer is willing and able to wait patiently and return later. The response of people with Severe ME is not always predictable; often the opposite rather than the expected occurs. This must be FULLY understood by the carer. 5. Be aware that it might not be possible, in any one moment for the person to receive the help they need,
Post a Comment
Read more
More posts